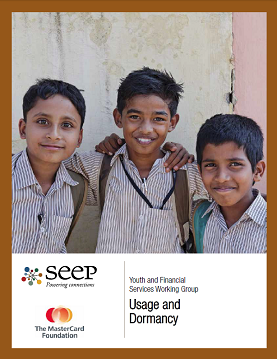 The United Nations Population Fund reports that there are 1.8 billion young people between the ages of 10 and 24, with 89 percent of them residing in less-developed countries (2014). In Sub-Saharan Africa, minors often account for more than 50 percent of a country’s population. Moreover, by 2050, the world’s population will increase by 2 billion, an increase of 28 percent, all of whom will require access to health and education services, and eventually to jobs and self-employment opportunities. With appropriate knowledge and tools, youth can be financially empowered to access economic opportunities in a sustainable manner. Although they represent a large potential market, the integration of youth into the formal financial system is still a relatively new concept in many countries. Access is limited by a lack of financial education, restrictive government policies, inadequate financial products, and limited awareness among Financial Service Providers (FSPs) of how to include youth in their portfolios.

The continued expansion of youth financial inclusion requires that dormancy be understood and addressed effectively. This paper presents innovative and impactful ways in which financial service providers (FSPs) can achieve higher rates of usage from youth by tackling the following questions:

This paper is one in a series of four Promising Practices Briefs written and commissioned by the SEEP Network’s Youth and Financial Services Working Group. These documents explore innovations and address operational issues in the promotion of effective financial services for youth. Topics were selected during a series of consultations held with Working Group members in January 2015.