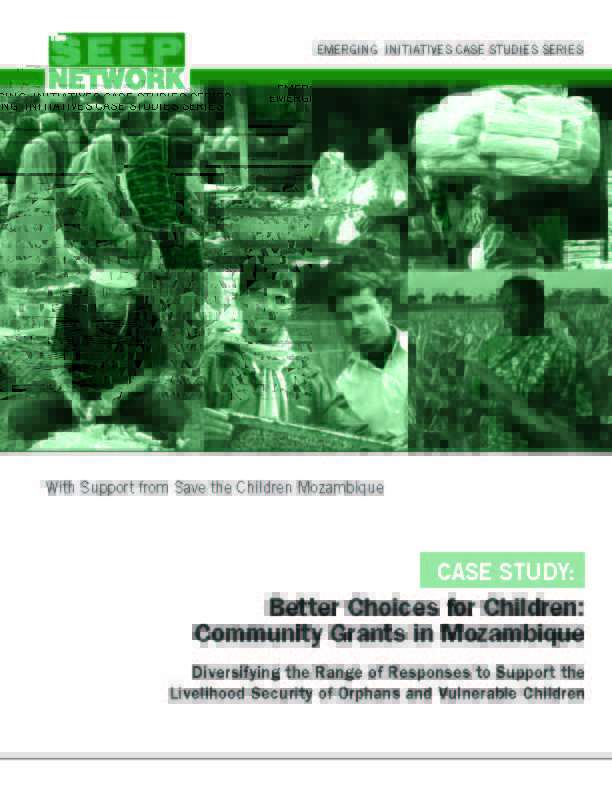 Save the Children in Mozambique has responded to the terrible living conditions of children in rural areas by designing a Livelihood and Social Protection Grants Scheme. Also known as community grants, this initiative was first piloted in rural Morrumbala District in 2004. The direct transfer of cash to communities and households is a growing and progressive area of social development, where families and communities are given the dignity of choice, encouraged to be innovative, and provided with the financial support to better address the problems they face. The community grants scheme has been an opportunity for Save the Children, district governments, and community groups to work together in providing care and support for orphans and vulnerable children. We believe it is a strong model for an NGO-government-community partnership at the district level.

In 2008, Save the Children’s three countrywide programs underwent a unification process in Mozambique and now operate as one program in five provinces. Currently, the community grants project is implemented in two districts of Zambezia province (Morrumbala and Mopeia), and there is potential for expanding the program within the country. Save the Children has a strong relationship with district governments, local associations, faith-based organizations, and other community structures in other Zambezia districts and provinces. Consequentially, we believe that expanding the project through the support of Save the Children is a possibility in the short-term with our capacity and expertise in fundraising and project design, implementation, and monitoring and evaluation. In the long-term, Save the Children could provide technical support for the development of market-oriented small-scale producers schemes for projects focused on rural development to the Ministry of Planning and Development (MPD) and district governments, which have provided funding through the “Investment Fund for Local Initiatives” (FIIL). More specifically, the District Aids Nuclei and District Directorates of Women and Social Action (though low in capacity in many districts) are appropriate potential government partners that could implement a community grants program.

On the one hand, expanding the community grants program would likely be most successful in districts where there is a tradition of association-building or community members already working collectively to assist marginalized groups. On the other hand, Save the Children is interested in the emergence of new civil society groups in areas where there is less of this tradition to form groups to support vulnerable children. This was the case in Morrumbala and Mopeia approximately six years before the launch of Save the Children's grants program.