When it all falls apart: VSLAs in crisis 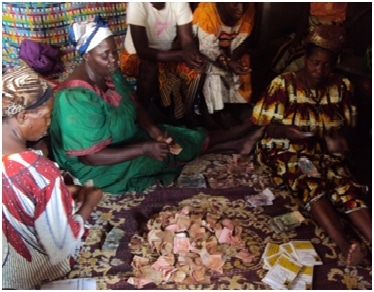 In the spring of 2011, election violence consumed Ivory Coast. The village of Tchebloguhe in the north of the country was brutally attacked. The village was burned. After the armed men left, slowly the villagers returned. One woman found her house and all her possessions goneâ€”burned to the ground. But she began digging in the charred soil, and unearthed a metal box with three locks, still intact.

It was the caisse, or cash box, of her Village Savings and Loan Association (VSLA). She was the treasurer, and before she fled, she buried the box that held the group's savings. When the attacks came, the group was about to have their "share-out," a meeting in which each member receives both her savings and her share of the group's profit made on lending. The box was full of the group's hard-earned, hard-saved money.

When the group returned, they had a quiet share-out and used their savings to help recover their losses and resume small-scale money-making activities. Immediately, they had something to help them begin to rebuild. 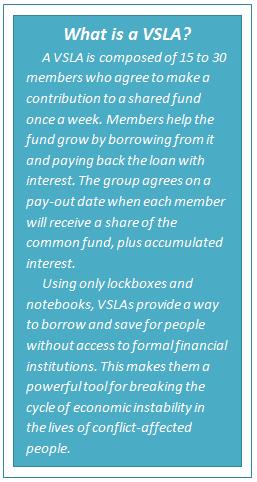 International Rescue Committee (IRC) works with 86 VSLAs in Ivory Coast, and of the 20 of those mostdramatically affected by the violence, the overwhelming majority had their share-outs just before or just after the attacks. Most resumed saving almost immediately. The groups made various adjustmentsâ€”reducing the minimum amount needed to save, extending the repayment terms, or allowing a grace period for repaymentâ€”but they all continued saving and lending together.

When Mathilde Dubois, IRC's Economic Development Coordinator in Ivory Coast, told me the story of the woman in Tchebloguhe, I was thrilled. I thought of how amazing it must have been for the group members to open that box and have something right away, something they themselves had saved and earned, to help in that black hour. It is critical for livelihoods to resume after a crisis, and these groups can be engines for recovery. What can we do to support them, I wondered, to reinforce them?

I also thought of those frantic moments in the village before the attacks came. How brave and quick-thinking this woman must have been! Without planning or discussion with her group, she found a way to protect their savings. I would have been terrified. She is truly a hero in my eyes.

When Mathilde and her team reconnected with the VSLAs, they all had stories to tell. Some groups gave their boxes to non-native Ivoirian members, who the group felt would not be targets of violence because they fall outside of the country's political and ethnic divides. Others gave their boxes to non-group members for safekeeping, buried their boxes, or held their share-outs in advance of possible attacks so each member could move with their own money. But all of this had to be done in the heat of the moment, and in great fear.

"We know the methodology is empowering and flexible," Mathilde told me. "These groups trusted each other and had more social cohesion than we ever expected in this divisive and violent time. We need to work with them to develop a 'Plan B' in case of conflict."

Determining this Plan B is an urgent need. In November, elections are planned for the Democratic Republic of the Congo, and there is expected to be violence. Many of the VSLAs we support in Ivory Coast are well-established, but our groups in the DRC they are just months into their first cycles. It is too early for share-out. What are the best contingency plans for them? Should they get their books in order and push up their audit process? Pause activities in anticipation of possible conflict? Set up secreted safe places for their cash boxes? In the next few weeks, we will start this conservation with our groups in the DRC: What is their Plan B?

Mathilde and her team are now working with the VSLAs in Ivory Coast and documenting how they adjusted, what they need now, and what we can learn from their experiences. We hope to see how they can be a force for recovery in their villages.

Sarah Ward and the IRC team will be attending the SEEP Annual Conference in November. There, they hope to share their thoughts and initial findings, and discuss how VSLAs can survive and thrive in unstable environments.