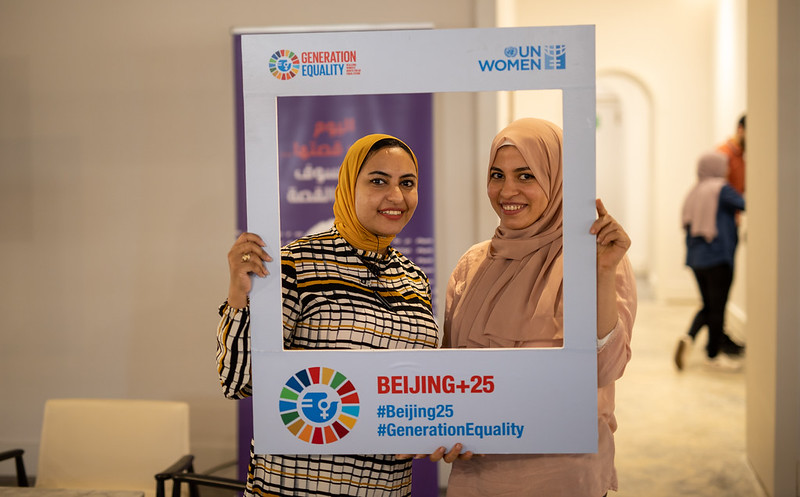 This blog is the second of a two-part series - co-produced by FHI 360 and MarketShare Associates - on Rethinking the Future of Women’s Empowerment in response to the global pandemic. The first part focused on the challenges and opportunities that the pandemic brought forth for women’s economic engagement in Egypt.

Over the last six years, FHI 360 and sponsor organizations have held annual Gender 360 Summits to highlight the importance of addressing gender-based violence (GBV) and overall gender and social norms as means to empower women. At the most recent virtual Gender 360 Summit in June 2020, speakers from around the world came together to corroborate and express their deep concern of rising GBV in the age of COVID-19. Due to physical containment, as well as socio-psychological stress related to the economic crisis that resulted from the lockdown, violence towards women is even more common now than before the pandemic. In this blog, we look at the current state of gender-based violence in Egypt, where incidents of sexual violence and harassment are widespread, and reporting them is difficult.

GBV has been prevalent in Egypt for generations. According to the 2014 Demographic and Health Survey, in many parts of Egypt, especially rural areas and among less-educated, violence within marriage remains socially acceptable. As women become more economically active, their risk of experiencing violence at home might rise if men feel threatened by their wives’ increased status; or decrease once women consolidate their economic power within marriage. The pandemic is likely to be another factor that might influence domestic violence trends in Egypt. A recent survey conducted by the Egyptian Center for Public Opinion Research in collaboration with the National Council for Women (NCW) and UN Women, shows that family problems have increased by 33 percent and violence among family members increased by 19 percent since the outbreak of COVID-19. Nehad AboulKomsan, a lawyer and gender activist who has been tirelessly working to confront GBV in Egypt for decades, confirms that the NCW GBV hotline has seen an increase of phone calls during the pandemic and many efforts which were underway to support women suffering from domestic violence have been disrupted due to the coronavirus crisis. Underscoring this, the Union against Harmful Practices against Women and Children, representing over 140 NGOs promoting women’s health, reports that since the pandemic, the demand for their services has increased while funding has been negatively impacted.

Mrs. Nehad AbouulKomsan also draws attention to the fact that women in Egypt have long found it challenging to report acts of domestic violence and sexual harassment, due to cultural norms, lack of self-confidence among the victims/survivors, and the lack of confidentiality and privacy in the litigation process. Heba Hagrass, a Member of the Egyptian Parliament, the National Council for Women and the National Council for Persons with Disabilities, confirms that we need to learn more about how women who experience harassment and violence can be encouraged to come forward.

While Egypt has put in place some good policies to protect women from their abusers, their implementation needs to be strengthened. For example, the Egyptian Ministry of Social Solidarity (MOSS) provides shelter homes for female victims/survivors of domestic violence, but their services are not sufficiently promoted in the media and their bylaws are opaque and subject to misunderstanding – as a result, the shelters are severely underutilized. Mrs. AboulKomsan rightly points out mitigating the impacts of GBV during and after the pandemic must be addressed within the context of a comprehensive system that supports victims/survivors of domestic violence and sexual harassment and provides technical assistance and capacity strengthening NGOs supporting the MOSS efforts.

The National Council of Women, an Egyptian organization established in 2000 which reports directly to the President, recognizes the challenges that women are facing as a result of the pandemic. NWC promotes general policies focused on activating women’s role and empowering them socially, culturally, economically and politically, as highlighted in the National Strategy for the Empowerment of Egyptian Women that the NWC has developed in 2017. In response to the pandemic, the NCW has proposed a set of measures to address the new challenges, ranging from the provision of psychosocial and therapy packages to families under stress to promoting increased representation of women in designing policies and strategies intended to reduce their vulnerability to disasters. In an effort to document all government initiatives aiming to protect women from the negative effects of COVID-19, NWC also established a tracker to monitor policies that are responsive to the needs of women during the pandemic. Monitoring the implementation of these policies should be part of an effective response to the crisis.

Undoubtedly, more research and data on the gender differential effects of COVID-19 are crucial for designing and implementing a comprehensive response to the social and economic impacts of the pandemic on women and to develop strategies that meet the needs of those who are most vulnerable. In the current context, more than ever, issues around gender-based violence need to become part of the public discourse and mainstream economic development programming. Solutions need to focus on strengthening government institutions and CSOs supporting women; but also target harmful social norms that allow violence to happen in the first place.

Ania Chaluda is a Technical Advisor in Monitoring and Evaluation at the Global Education, Employment, and Engagement Unit at FHI 360, where she designs and implements monitoring, evaluation and research approaches for international development programs, with emphasis on gender and social inclusion.

Iman El Shayeb is an FHI 360 Senior Technical Consultant and an international development professional, designer and launcher of portfolios specializing in economic growth, gender and women empowerment and democracy and governance. Ms. El Shayeb directed high profile and multifaceted portfolios with the US government and private sector. Her work experience includes the U.S., Iraq, Jordan, Germany, Afghanistan and Egypt. She has an MBA and a Bachelor of Arts, majoring in Business Administration from the American University in Cairo.