Looking Backwards to Move Forward: What Traditional Ways of Saving in Groups Can Teach Us 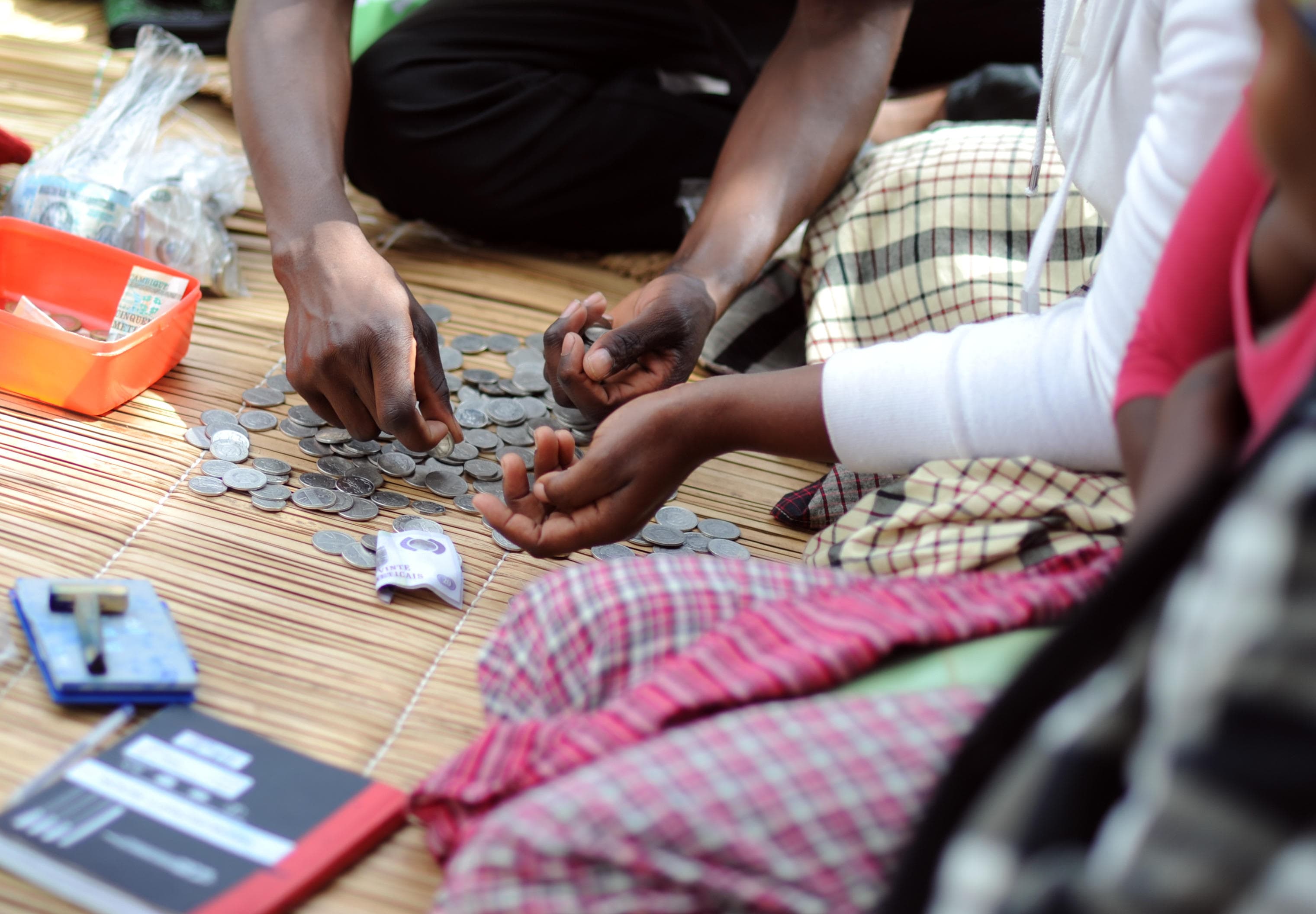 It was the summer of 2004. Mamadou Biteye [1] and I [2] met a group of women traders at a market two hours from Bamako, Mali’s capital [3]. Before we made our pitch for Saving for Change, I asked, “Are any of you saving in a tontine?” Their hands shot up. Then I asked, “How does a tontine work?” One woman said, “We save money every week and each of us, in turn, receives her payout.” She described in detail how she organized her tontine as the others listened intently. Another woman chimed in, “We save for a year and then divide the money when most of us need it.” Another added, “We save money so we can buy what [we need to] sell at wholesale [prices]. That way we make more money.” In less than an hour, they had described to us three ways that they saved money in useful amounts, adapted to their specific needs.

Mamadou and I listened politely and then, using piles of pebbles to show how fast the loan could grow and drawing circles in the dirt to show how savings groups were organized, we explained how Saving for Change was better than the traditional ways of saving, or so we believed.

As Saving for Change spread to some 10,000 villages across Mali, Senegal, Cambodia, El Salvador, we rarely thought about tontines. We were too busy training, evaluating, dealing with partners and raising money. Nevertheless, what those women said about their tontines haunted me. What would Saving for Change have achieved, I thought if instead of introducing, our model we learned more about how informal groups worked? What if we asked the tontine leaders how they would advance their communities, and asked those with the best ideas to become agents of change instead of contracting local NGOs to introduce our model?

There would still be a role for NGOs but instead of training new groups, the NGO staff would facilitate the exchange of ideas between existing group leaders, document what they said, and share what worked best. Tontines – or susus, tandas or merry go rounds, every country has its own name – exist in most villages throughout Africa, Asia and Latin America. They draw on traditions developed and perfected over generations and adapted to specific needs.

With this question in mind, when I left Oxfam, I asked graduate students from my Finance for the World’s Poorest classes at Brandeis and Columbia Universities to study the mechanisms of informal savings in immigrant communities in the United States. We quickly learned that wherever there was a cluster of immigrants, it was likely that at least some of them are part of a group that saved money. Savings circles are everywhere. Once I got in a cab in Washington DC, and after I chatted about my time in Ethiopia and Equobs, the Ethiopian cab driver told me he was part of an Equob with 15 members. They saved $1,000 per month to buy new cabs. Latina room cleaners I spoke to in Des Moines, Iowa said that ten of them saved $30 every week. Each of them, in turn, received a $300 payout.

As my students and I asked more questions, we learned that these groups had addressed every issue us savings group advocates had struggled with for decades. Whether the experience came from African, Asian, or Latin American countries, their commonsense solutions were similar in nature:

1) Selection: Choose those you know and trust.

2) Accountability: Test new members by giving them the last payouts.

3) Flexibility: half shares or multiple shares depending upon your savings capacity. If you cannot pay, your friend will pay.

4) Profitability: For an early payout, pay more; for a late payout receive more than you saved.

5) Building community: Dinner after the meeting; associations to pay for illness and burial.

6) Business development: Learn from your peers. Start a joint business with each sharing the profits.

7) Paying organizers: Give the organizer a tip when you receive your payout.

What if instead of promoting our model of organizing savings in groups, we helped implement their ideas? Our job would be to ask questions, facilitate the exchange of experiences, and, if appropriate, link their plans to outside resources. We are seeking funding to test this idea and mobilize activists and financiers to identify, fund, evaluate, and scale-up these locally defined and managed initiatives.

Most help, whether from the government, non-profits, or the private sector, assumes that those from resource-constrained communities are somehow deficient in their capacity to solve problems. We work hard to have them adopt our plans; let us just work just as hard to them help implement theirs.

If you have questions or even want to set aside some of your resources to test these ideas. I would be happy to provide access to our research and our study guides. Please contact me at jeffaashe@gmail.com.

2. Jeffrey Ashe was the Manager and then the Director of Community Finance for Oxfam America between 2004 and March 2013. He teaches Finance for the World’s Poorest at Columbia and Brandeis Universities and studies informal savings.

3. Saving for Change was carried out in partnership with Freedom from Hunger. It is similar to other savings group programs with Care’s Village Saving and Lending (VSLA) Program the best know example. In a savings group villagers, save money usually weekly and take out loans from the growing fund. The fund is typically divided according to how much each has saved after a year so each has a lump of capital that they can use as they choose.

Jeffrey Ashe is a Fellow at Carsey School of Public Policy, University of New Hampshire and Research Fellow, Global Development and the Environment at Tufts University. Jeff lead Saving for Change at Oxfam America which grew to 703,000 Savings Group members in Mali, Senegal, Cambodia, El Salvador and Guatemala. He previously founded and led Working Capital which for several years was the largest microfinance initiative in the United States. While at Acción International Jeff directed the first worldwide study of microfinance, introduced group lending to Acción and helped spread this model worldwide. He has consulted to microfinance projects in more than 30 countries. Jeff is co-chair of the Grassroots Finance Action Team that is researching and testing innovative approaches for ending extreme poverty by 2030. He has recently completed a study on immigrant savings circles in America and is exploring how investors and activists can build on the savings circles that are already in place. Jeff teaches “Finance for the World’s Poorest” at Columbia and Brandeis Universities. His book, “In Their Own Hands: How Savings Groups are Revolutionizing Development” has been well received.