Savings Groups As A Platform for Women's Political Empowerment 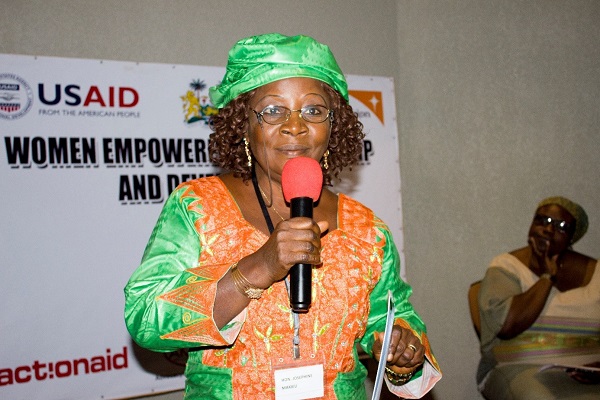 Sierra Leone ranks high on the United Nation’s Gender Inequality Index: 150 out of 189 countries. The Sierra Leone national election commission reports that 52% of the registered voters in 2018 elections were female. However, only 12.7% of seats in Sierra Leone parliament are held by women. Sadly, the demographic strength enjoyed by women in Sierra Leone does not translate into an appropriate representation of women in the country’s decision-making processes: a setback to Sierra Leone’s progress in achieving gender equality and advancing inclusive development.

With the goal to advance gender equality in the country, World Vision Sierra Leone piloted the use of Savings Groups (SGs) as a platform for women’s political empowerment. The USAID-funded Women Empowered for Leadership and Development (WELD) Project was implemented from September 2014 to February 2019, with the goal to increase women’s participation in the social, economic and political space in Sierra Leone.

WELD facilitated the formation of SGs comprising of 361 women through a self-selection process in seven districts within its area of operation. The primary objective of forming the groups was to economically empower women and promote political participation of women at the national, district and city levels. Female aspirants were to be identified, trained, mentored and coached. The WELD team realized that savings groups not only provided a platform for women to nurture their leadership skills but also social networks that could be harnessed to support female aspirants. WELD identified female aspirants within the groups and encouraged others who were not members to link up with the SGs in their communities.

As part of the groups, women used their social funds to purchase promotional materials for campaigns led by female aspirants running for local council or parliamentary positions in their communities. They also organized fundraising events such as football matches, dinners and dances to raise funds for fellow aspiring women. They utilized their inter and intra-group networks to attract voters to cast their ballot in favor of the aspiring candidates.

Hon. Josephine is also a member of the female parliamentary caucus, a group actively lobbying to steer policy towards advancing gender equality and women’s empowerment in Sierra Leone.

In her own words,

I received support from women in the Lowoma group, a cluster of twelve savings groups with over two hundred female members. I shared my political ambition with the group, and they accepted to support me whole-heartedly. They organized ‘pay to watch’ football matches and dances and mobilized money for my campaigns. They also used part of their social fund to print campaign materials, such as t-shirts and banners. They also went door-to-door to campaign for me. I have reciprocated their gesture by constructing six classrooms in their community. I have also secured funding to construct a health facility. I will always be grateful to them.

Most women said they gained self-confidence and learnt public speaking. One female member of the parliament was pleased with the SG interventions as she is now offered gifts from her constituents, as opposed to the constituents expecting handouts when visiting their communities.

The research report will soon be released. If you are interested in learning more, please contact Angeline Munzara.

Mark is an M&E Specialist for the WELD Project at World Vision Sierra Leone. A monitoring, evaluation and learning specialist with over ten years of experience in relief and development programmes, he has a strong vision, enthusiasm and an unquenchable thirst to achieve successful outcomes that advance learning and evidence-based practice in social development programmes. He is skilled in monitoring, evaluation and learning in projects that promote gender equality and women's empowerment and is experienced in using quantitative and qualitative methods for research.

Tom is Chief of Party for the WELD Project at World Vision Sierra Leone. As an agricultural economist, he has worked in the humanitarian and development continuum, specializing in building and strengthening livelihoods, and improving women’s access to social, economic, and political rights. After more than 20 years in academia and the humanitarian sector, Tom understands what truly drives the conversions that connect with the heartbeat of target beneficiaries and communicate that understanding back to them. Tom holds a Ph.D. in Agricultural Economics specializing in agricultural development and marketing.