An Innovative Pathway to Smallholder Farmer Resilience During Pest Crises 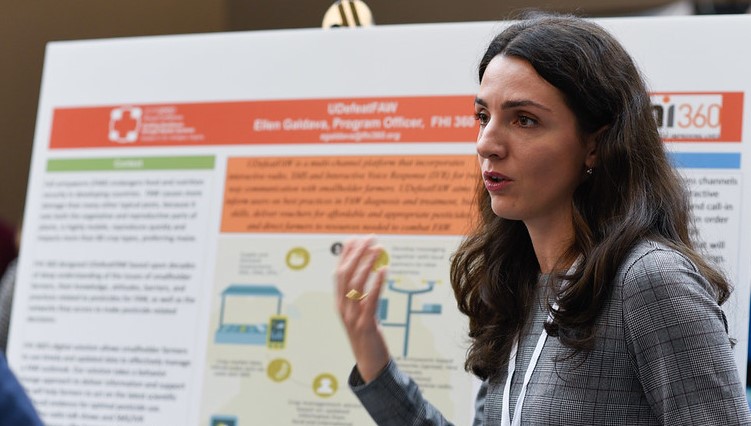 Fall armyworm (FAW) has been making headlines across the world due to its devastating impact on food security. It was first spotted in Nigeria in 2016 and by the end of 2017, FAW had spread to 39 African countries. The pest did not stop in Africa but spread across Asia, reaching China in 2019. Within three years, FAW outbreaks have spread across two continents, diminishing food security on their way, causing economic loss in developing countries and testing the resilience of smallholder farmers. Compared to other pests, the FAW is especially destructive because it attacks both the vegetative and reproductive parts of crop plants, which makes it extremely challenging and expensive to exterminate.

With the widespread growth and accelerating nature of FAW outbreaks, international donors and implementing partners have realized that locally-driven interventions are necessary to curtail its impact on the livelihoods and resilience of smallholder farmers. FHI 360 has designed an innovative approach to combat FAW – UDefeatFAW – based on the award-winning digital solution tested under our Climate Change Adaptation and ICT (CHAI) program in Uganda and a pest management needs assessment completed in Ghana under the Mobile Solutions, Technical Assistance and Research (mSTAR) project. We already had an in-depth understanding of smallholder farmers’ use of and attitudes toward technology platforms with the CHAI and mSTAR projects. The data helped us in assessing their attitudes, perceived benefits and barriers, and practices related to pesticides for FAW, as well as the networks they access when making pesticide-related decisions. We used this data to design UDefeatFAW as a multi-channel platform that incorporates interactive radio, SMS and Interactive Voice Response (IVR) for two-way communication with smallholder farmers. UDefeatFAW aims to shift social norms, build skills, deliver vouchers for affordable, correct pesticides, and direct farmers to needed services and supports. By integrating interactive radio features with messages and visuals via SMS/IVR, UDefeatFAW links farmers to local resources and promotes priority behavioral modifications for farmers in the wake of a crisis.

In 2018, FHI 360 piloted UDefeatFAW in Uganda (Luweero District) after the solution was selected as a top finalist in USAID’s Fall Armyworm Prize Challenge. When piloting UDefeatFAW, we designed and aired three radio talk shows, where presenters announced a dial-in-number for farmers to call for FAW related questions. Also, as part of the pilot, we successfully sent out more than 130,171 SMS to farmers and, in order to be responsive to the existing FAW crisis and to engage in continuous interaction with listeners, we launched a 24-hour IVR service. The content, developed by FHI 360 and partners, is in English and in local languages, tailored to the specific district and aired on state and privately-owned radio stations.

Combining radio, SMS and IVR was purposeful as our aim was to reach the most vulnerable populations, especially women and children. For example, in Uganda 62% of men and 46% of women own a mobile phone. We included interactive radio and specific time when women were most likely to be at home, to air radio shows and to reach female farmers Also, the digital literacy rate across Africa remains low and SMS and radio cannot be the only solution to reach communities with low literacy levels. Therefore, IVR services allow farmers lacking basic literacy to dial-in and select a preferred recorded message to listen to information and updates on FAW.

In contrast to other technology solutions, our aim was to ensure that FAW-related behavioral change communication reached the most vulnerable and rural populations. As with any pest crises, rapid and efficient response to limit its devastating impact is critical. UDefeatFAW is a fast, flexible and socially inclusive digital solution to educate farmers on managing FAW or any other pest and build smallholder farmer resilience.

To assess the impact of UDefeatFAW, FHI 360 conducted a randomized study where we talked to 38 smallholder farmers in the Luweero district, out of which 16 were in-person interviews and 22 part of the two focus group discussions. The study revealed that despite the limited time to promote UDefeatFAW radio talk shows, 26% of interviewed farmers heard about UDefeatFAW on radio. Those respondents who listened to the radio talk show mentioned that the information about pesticides and ways to fight FAW was very useful. Additionally, participation of a government official in the show and ability to ask questions regarding maize prices was helpful for farmers. The study also asked farmers about their experience using UDefeatFAW SMS. More than 23% of respondents received a text message from UDefeatFAW and found the content useful in managing FAW on their farms. The study further confirmed that farmers lack appropriate guidance regarding ways to combat FAW and need more information on types of pesticides to use and how to correctly and safely mix them.