All You Ever Wanted to Know About Savings Groups: Evidence-based Insights on Participation in SGs

In the weeks leading up to SG2018: The Power of Savings Groups in Kigali, all presenters and participants are thinking about what people already know about Savings Groups and what the rest of the world should also know about them.

What We Want to Know

Many of the SG2018 participants have a wealth of data on how “their” savings groups work, what people appreciate and what could be improved. But what is the situation in other locations that are not particularly related to one program or another? To what extent have Savings Groups reached all parts of a country? How many people use the ASCA (Accumulating Savings and Credit Associations) methodology? Or do people go “back” to the simpler ROSCA (Rotating savings and credit association) methodology after a program stops? How many Savings Groups participants would we find in a random sample? Do they participate in one group or several? And why? Do more women than men participate? Do the poorest participate? Why do people participate? Why do others not participate? What are the most common problems? And how widespread were these problems? How much did people save in their savings groups? And how does that savings amount compare to other forms of savings? How many take loans from their savings group? And which other loans do they access? How many groups have a certificate of registration? How many have a bank account?

L-IFT dared to ask all these questions and even more to 1327 people in 12 districts in Uganda. The entire sample of 1327 people participated in two surveys: baseline (August/September 2016) and end-line (April/June 2017). During the six-month period between baseline and end-line where we collected data, 580 of these participants gave repeated interviews every other week using the financial diaries methodology.

What the Results Show

In this blog, we don’t want to disclose the entire story. To learn more about the findings, come hear us at the session “How Low Can We Go? Evidence-based Approaches for Savings Groups,” where L-IFT is participating in a discussion panel with other organizations.

We do, however, wish to disclose some of the findings as a teaser: Why do people join Savings Groups instead of using other financial tools? And why do others not join? 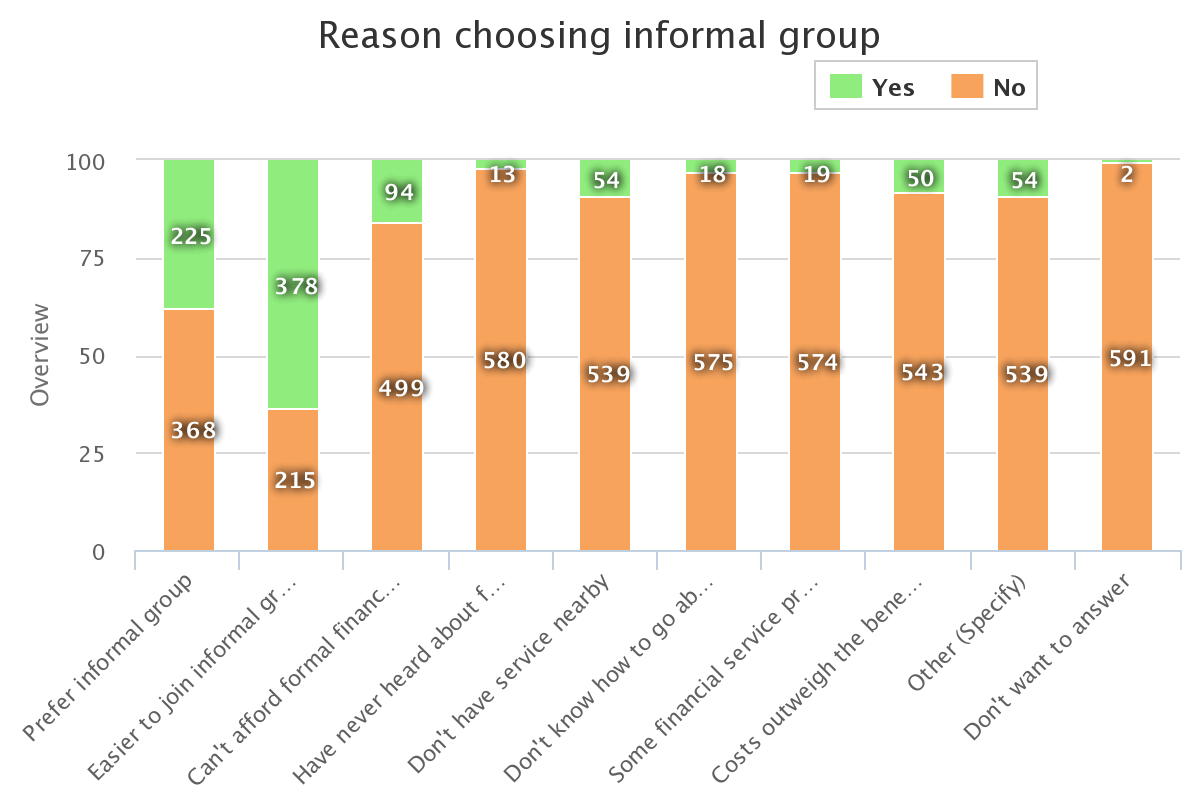 All people who are in groups shared with us their personal reasons (multiple choices possible) to make use of Savings Groups rather than formal financial service providers. The majority, 63%, said it was “Easier to join informal group” with the second reason being: “Prefer informal group”. So here we can conclude that the accessibility and low hassle of joining are the prime reasons for people joining Savings Groups.

When we asked people who were not part of a group about their reasons to not join, we found the following reasons (again, multiple answers allowed): 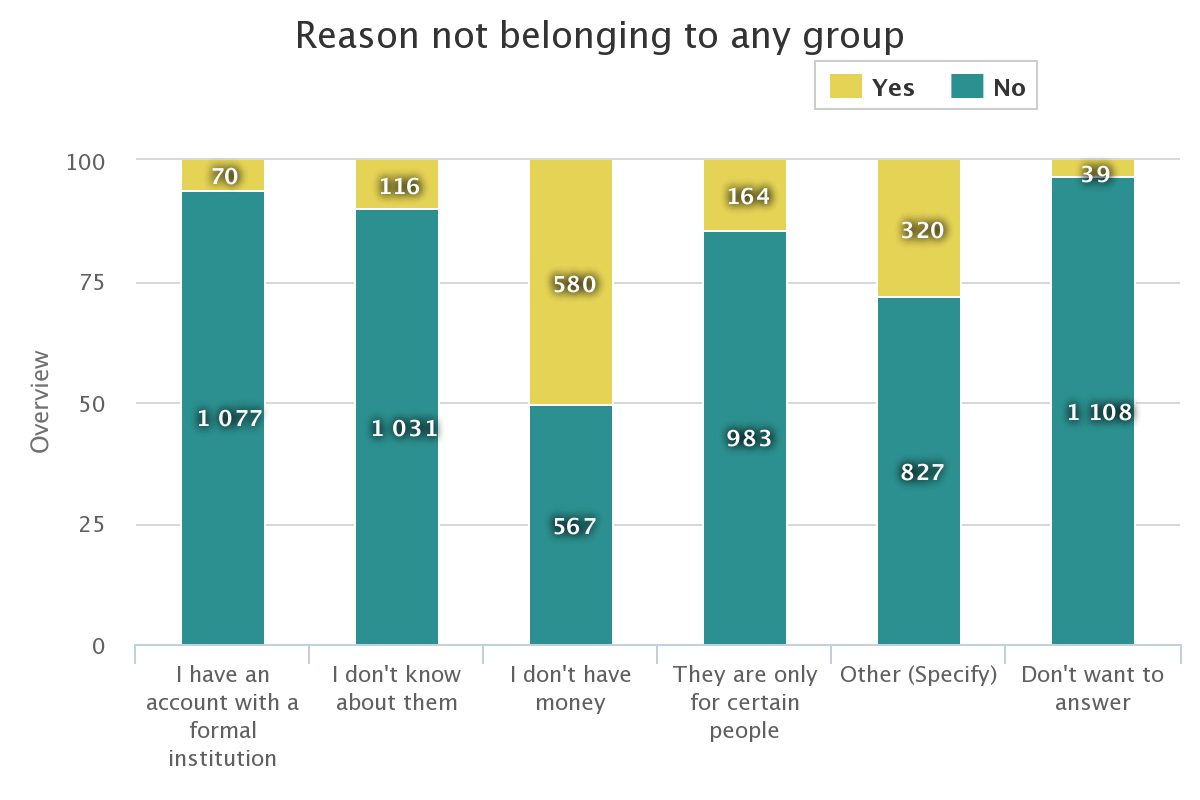 Those people who shied away from Savings Groups primarily did so because they didn’t have the money, which was the reason for half of them. In addition, they cited a variety of “other” personal reasons, details of which we did not ask. Importantly, almost none of them said they did not join because they were served by a bank account. Additionally, almost half of those in a savings group also had a bank account, suggesting that the bank account was, at this stage, not serving all of their financial services’ needs.

Very few people said that they did not join because they did not know about any groups, suggesting that in these districts in Uganda, groups were mostly well-known. It was also rare that people felt they were not welcome in such a group. The option “They are only for certain people” was selected by only 164 people or 14% of those who had not joined a Savings Group (This data comes from the baseline original data set which covered 2109 people.). These 164 people find Savings Groups unwelcoming.

We hope that these findings got you excited and will prompt you to join us at our Peer Learning Session at SG2018. We have lots in store, e.g. our findings also challenge some of the expectations you may have with regards to the participation of men or the impact of mobile money on SG participation.

Anne Marie started her career back in 1989 working as a staff economist and researcher with BRAC in Bangladesh. From that moment until now (and for some time in the future, most likely), the theme of financial inclusion has been her passion. She worked and lived in three continents in different capacities, including gender and financial inclusion advisor in an agricultural programme in Zambia, as an advisor setting up a microfinance institution in Vietnam, advising different organizations in Angola, freelancing and setting up a company in Bolivia and in Colombia co-founding e-kulki. e-kulki is the first cashless (fully digital) savings group promoter where groups can leave all the hassles and admin to a platform and can concentrate on the social bond and group mutual support system while the savings and transactions are secure (good for urban Colombia). In 2015 Anne Marie founded L-IFT (www.l-ift.com) which promotes financial inclusion by using financial diaries as a tool for communication between financial institutions and their clients as well as helping savings groups using their savings records for members' individual financial track-records.