A Tale of Two Vendors: Gender Roles and Entrepreneurship in Chad's Lake Region 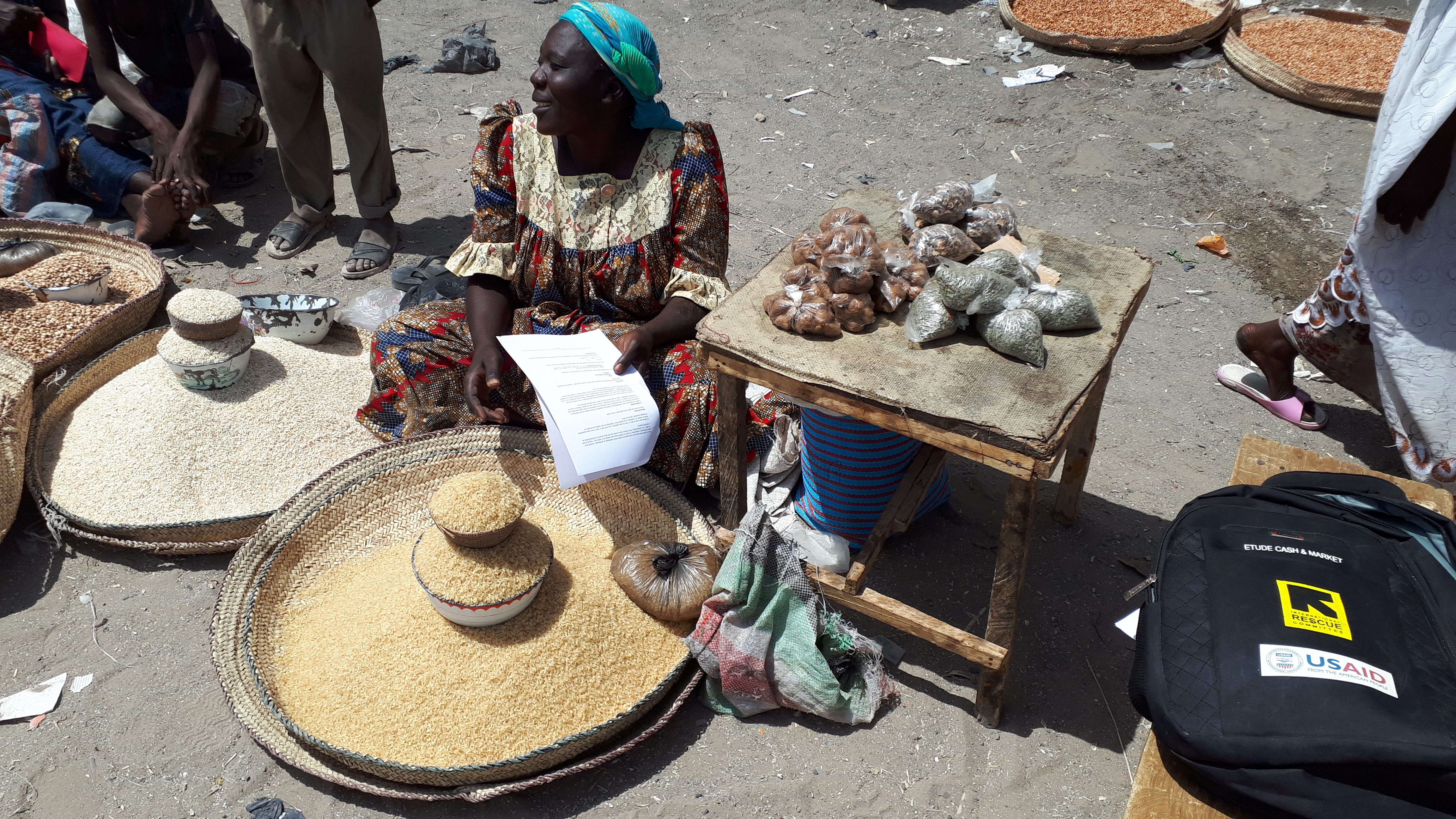 Aisha sells a modest array of staple foods under the forceful March sun in a busy market in Chad’s Lake Region. Sorghum and other grains, beans, peanuts, okra and an assortment of other dried foods are spread out on a tarp in front of her, with no roof to shelter them, or her, from the sun. But the shop’s location is good, just at the entrance to the market, facing a major thoroughfare.

Until recently, Aisha worked in the family’s agricultural fields with her husband. Though the crops grew well, the family had to sell some of the harvests to buy things it could not grow, like oil and seasoning. Both food and money were inadequate to meet the household’s needs. Aisha thought about starting a business to supplement the family’s income. In the beginning, she only sold food that the household had grown itself, but she eventually grew her venture to add other products as well. “I wanted to be a woman who helped to financially support her family”, Aisha told us.

Meanwhile, only a short distance away from Aisha’s shop, inside the official marketplace, Amadou sits on a plastic chair in the relatively cool air of his electronics boutique. Like Aisha, Amadou was not born into the business world. After finishing Qur’anic school at the age of 18, he began his sales career as a mobile vendor. Little by little, the profits he accumulated allowed him to purchase his own merchandise. After several years of this, he bought his own shop.

The International Rescue Committee (IRC) spoke with several hundred vendors in Chad’s Lake Region in 2019 and 2020 as part of a USAID-funded research project, Generating Evidence on the Effect of Cash Relief on Local Markets. The research focused on the effects of cash and voucher assistance on wholesalers and retailers in local markets, the challenges that vendors face in the aftermath of a crisis, and the types of support that crisis-affected vendors would find most useful to recover, maintain or develop their businesses.

Aisha and Amadou’s business stories come from open-ended interviews that IRC conducted with six vendors, three women and three men, as a complement to the quantitative and qualitative research. The names have been changed to protect their identities and some details have been consolidated from multiple stories.

One of the most striking findings coming out of the research in Chad was the disparity between women and men vendors. This was borne out in several ways, but most starkly in terms of business size. Overwhelmingly, larger-scale vendors, meaning those engaged either completely or partially in wholesaling, were men. Only five of the 54 women interviewed in the qualitative research were engaged in wholesaling, and none of the vendors who had been contracted to work with NGOs as suppliers for voucher programs – an undeniably lucrative gig - in the entire Lake Region were women.

This disparity is all too common. According to UN Women, only 63% of women at a global level participate in the labor force, as compared to 94% of men; women tend to face more hardships in starting businesses than their male counterparts; and women are greatly outnumbered by men in the upper echelons of corporate leadership. Our findings are nothing new; however, they do provide a deep dive into gender roles within a specific context and within the lives of individual women and men. 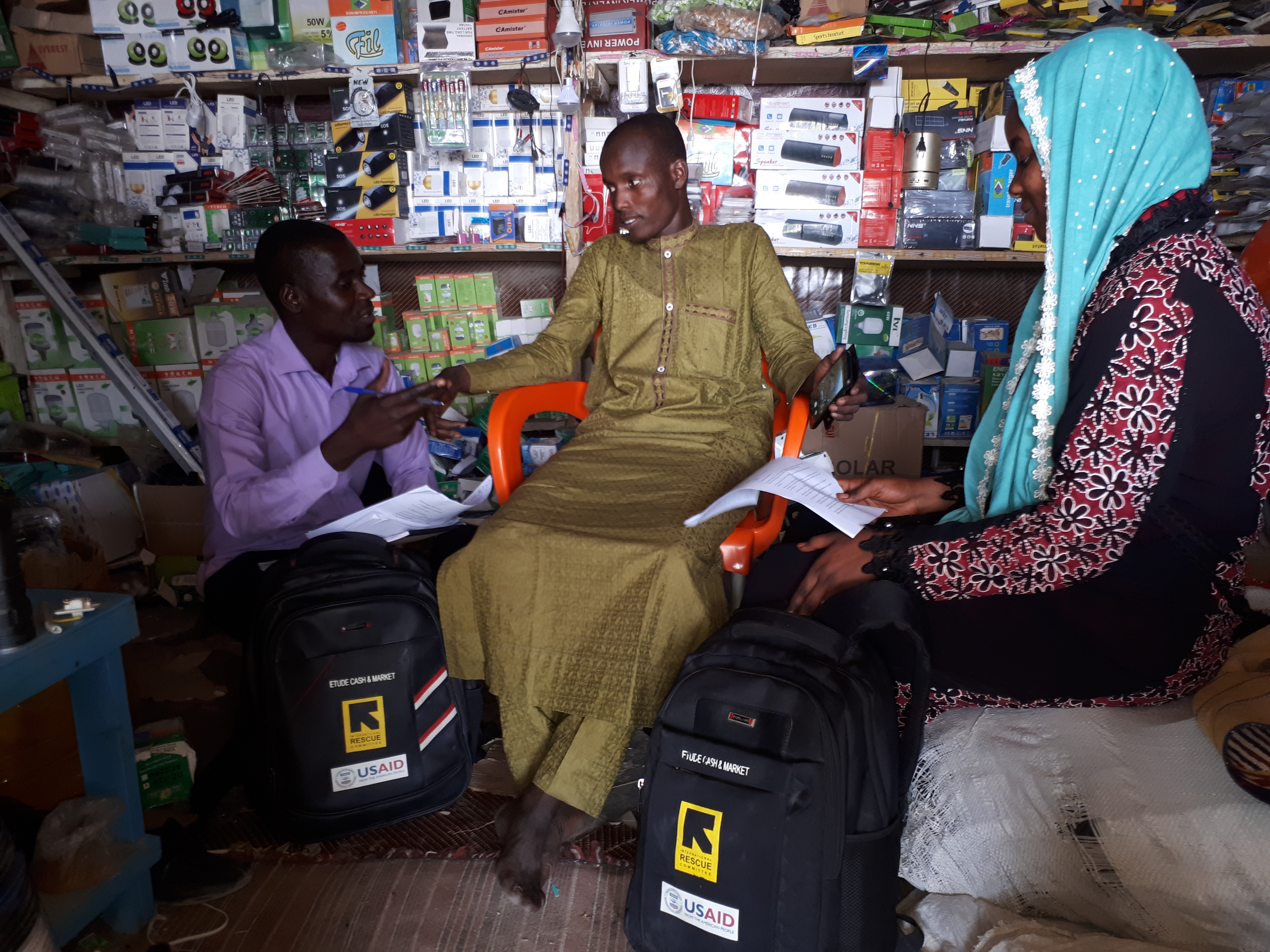 Neither Aisha nor Amadou has any formal business training; they learned as they went. Aisha attributes much of her business’ success to her personal relations skills. She offers a fair price and throws in a little extra for every customer, which has helped her to grow a sizable and loyal customer base.

At the same time, Aisha recognizes that being a woman puts her at a disadvantage. In her culture, men are typically supposed to meet the financial needs of their households, while women are expected to fulfill all the unpaid household tasks. Women who work must perform double duty, and this constrains the size and scope of their businesses. Aisha’s greatest fear is that she, or someone in her household, will get seriously ill, and she will have to give up her business. In Chad, women’s mobility is also more limited than men’s, which means that they typically cannot travel far to resupply. In Aisha’s case, this has created problems in the past; in one instance, a man who offered to transport merchandise for her took her money but never delivered the goods. Both women and men vendors agree that mostly older and widowed women, less constrained by traditional gender norms, stand a better chance to prosper in the business world.

Things are easier for Amadou. Though he seems to have a knack for business, there are also fewer barriers in his way. He can travel freely and has over time developed strong relationships with numerous suppliers in Nigeria, Niger and the Chadian capital, N’Djamena.

Amadou initially faced some struggles and at times procured merchandise he could not turn for a profit, but he is now sought out as one of the few electronics suppliers in the area. His earnings have allowed him to invest in buying and selling land, buildings, and rental housing that offer additional revenue streams. Amadou now offers goods on both a retail and a wholesale basis and counts humanitarian actors – both agencies and their staff - among his customers.

Our research findings suggest that Aisha and Amadou’s experiences are the rule rather than the exception. It turns out that Aisha’s fear of illness disrupting her business is well-founded; our research found that women-owned businesses were more than twice as likely to have been negatively impacted by an illness in the household in the last three months, and women vendors were more likely than men to report a business interruption in the recent past due to personal or environmental shocks.

Aisha and Amadou both agreed that cash assistance to vulnerable people in the greater community was generally a positive thing for the marketplace, but that it influenced them minimally on a personal level. The vendors we spoke to, overwhelmingly told us that NGOs could help them, especially women vendors, in regaining control of their businesses by providing capital. Cash assistance would allow the vendors additional flexibility to address personal priorities. For example, Aisha’s ambitions are modest; she would like to construct a well-built hangar to help shield herself and her products from the elements. Amadou, meanwhile, would like to continue to expand the size and scope of his business, and to someday pass it on to his children. Other vendors told us they wanted to invest in means of transportation, bulk merchandise, storage facilities and improved roofing. Although providing vendors with business capital wouldn’t directly address the cultural barriers affecting women, it could certainly help vulnerable vendors, including women, to grow and maintain their businesses.

Emily Sloane works as a Cash and Markets Technical Advisor at International Rescue Committee. For more information about IRC’s research on cash and markets, please write to emily.sloane@rescue.org.