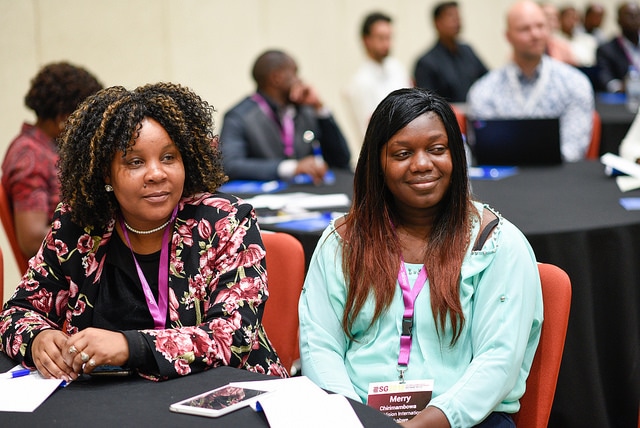 This blog was originally published on WomenStrong International. We are pleased to share it here with the SEEP community.

SG2018: The Power of Savings Groups, hosted by the venerated SEEP Network in Kigali, Rwanda, saw two WomenStrong Consortium Members in attendance: DHAN Foundation of Madurai, India, whose leaders were honored to present some of DHAN’s unique, integrated strategies for emerging from extreme poverty, and Alice Visionary Foundation Project, of Kisumu, Kenya, whose leadership came to share and to learn.

Nearly 25 years ago, a group of US-based NGOs pioneered new strategies for enterprise development and microcredit, seeking to promote economic opportunities for the world’s poor. With support from USAID’s Office of Private and Voluntary Cooperation, they formed a project, which was later branded as “The Small Enterprise and Education Promotion Network”. Since then, SEEP has held conferences that offer attendees a chance to share experiences and knowledge.

SEEP’s Global Savings Groups Conference, held every two years, offered a platform in May for attendees to connect and learn from each other about the supporting savings groups worldwide. The conference, held this year in Kigali, Rwanda, engaged a large and diverse community of stakeholders, developed and promoted improved standards of practice, mobilized knowledge, strengthened partnerships and alliances, and created opportunities for cross-organizational learning.

More than 450 technical experts were represented by organizations from 50 countries (mostly in Africa, and a few from South East Asia and Latin America) at this last meeting, which I attended representing my organization, Alice Visionary Foundation Project, a WomenStrong Consortium Member. We were joined by representatives from Savings Groups, government, technology firms, financial service providers, development organizations and funders, all with unique perspectives and experience.

For me and my colleagues, Senior Program Manager Tom Achola and Group Savings and Loan Field Coordinator Dennis Onyango, the conference was an eye-opener. We learned that a savings revolution is taking place, and innovative ideas are helping Savings Groups reach the people who are still financially excluded. We heard about a variety of savings group models, such as Self-Help Groups (mostly in Southeast Asia and parts of West Africa), Group Savings and Loan programs, and the financial graduation model developed by Bangladesh Rural Advancement Committee (BRAC), one of the largest global providers of financial services for the poor. The latter model proved to be handy for reaching the poorest of the poor because it involves some elements of social protection. We also learned about the role Savings Groups play in achieving Sustainable Development Goal 1 – eliminating extreme poverty by reaching the vulnerable and extreme poor.

Dozens of Keynote, Tutorial and Technical Sessions discussed the challenges, opportunities, and problems with the application of saving groups in various fields. For me, one of the most exciting speakers was Paul Rippey, who touched on the topic of peer-to-peer group formation, the creation of spontaneous groups. These groups are forgotten and so are rarely included by organizations when reporting outreach figures, meaning that the number of people who are financially included are underestimated – groups have greater reach than the official numbers suggest. A woman from Missouri shared the story of how she started a spontaneous group to counter poverty in her state where usurious “payday loans” are a main source of credit for the poor. From this discussion, we saw the need to support spontaneous groups by linking them to different financial and legal services. Lauren Whitehead gave a talk on “expanding outreach to more vulnerable and diverse population,” explaining that Savings Groups reach very poor and vulnerable populations more effectively than institutional microfinance programs. She noted that Savings Groups require little infrastructure, that savings deposits and loan repayments are flexible, and that even the most vulnerable members of the community can understand and participate in group operations. “It’s definitely true that Savings Groups can be a stepping stone to both social protection and financial security to local poor people in the rural areas,” she said. “In the Saving Group, it’s not only money, but other issues facing individuals that can be addressed together. In the Savings Group, members share experiences, pray together and support one another.”

An Interactive Session we attended discussed how Women’s Economic Empowerment through Financial Inclusion faced a number of gender-based barriers, such as lack of bargaining power within households, a concentration of women in low-paying economic activities, as well as a lack of assets for collateral, a lack of formal identification, sexist requirements for opening bank accounts, and lower rates of cellphone ownership among women, preventing them from accessing digital financial products available to men.

In Sub-Saharan Africa, only 13 percent of women and 18 percent of women and men over the age of 15 save through formal financial institutions. Donors must continue to support the creation of new Savings Groups, while governments and the private sector need to offer ongoing support, if scale, quality, and equality are to be achieved. One disturbing panel included speakers who suggested that the role of creating Savings Groups should be left to governments and the private sector. But in the end, given the scale of global need and the different kinds of expertise and perspectives offered by different organizations, almost everyone on the panel agreed that achieving scale and quality would require the engagement of donors, the private sector, and government.

We learned about tactics and approaches that we can apply within our own organization in Kisumu, and others that were less useful. But overall, any organization working in economic empowerment of the poor will find the biennial SEEP conference a rich source of best practices and good ideas.