What Happens When You Combine Business Know-How With Savings Skills? Explore with this interactive infographic.

Ten-and-a-half million. That's the number of Savings Group members worldwide, according to SEEP Network data. For more than two decades, in 70 countries, the groups have been credited with banking the unbanked, boosting women's economic empowerment and strengthening social cohesion.

Now, according to new research, another accomplishment can be added to the list: boosting incomes by 75 percent while creating thousands of jobs. That's what happened when Hand in Hand teamed up with CARE in Rwanda teach business skills to 100,000 Village Savings and Loan Association members (Savings Groups members for short) , the majority of them women. 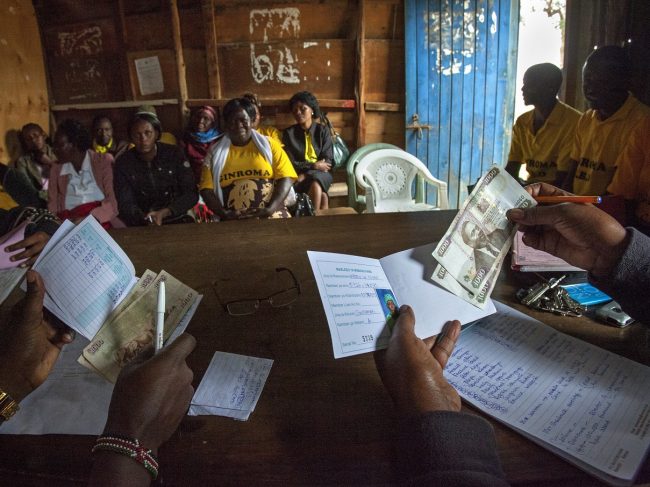 Through the help of NGO Hand in Hand's business training and the concept of 'table banking' members of the Ginroma Self-Help Group have all become successful business people in Njathaini based in Kasarani on the outskirts of Nairobi.

How Hand in Hand Works

Established in 2003, Hand in Hand mobilizes members and teaches them to save, but we aren't focused on financial inclusion per se. Instead, we see groups as the means to an end: job creation. That means training each and every member in how to run their own business, providing in-house microfinance when group savings aren't sufficient to fuel expansion, and linking members to larger markets to help grow their businesses. Over the years we've mobilized 1.8 million members and created 2.6 million jobs , a start, but nowhere near our ultimate goal. In order truly reach scale, strategic partnerships are indispensable.

How Hand in Hand worked with CARE Rwanda

In 2013, Hand in Hand and CARE joined forces around a common goal: to promote entrepreneurialism among 100,000 Savings Groups members in Rwanda, creating 80,000 sustainable jobs in three years.

An independent review of the program published last month confirms what our experience in the field told us all along: Hand in Hand's partnership with CARE was a considerable success, exceeding targets in several major categories.

Access to CARE's pre-existing Savings Group infrastructure gave Hand in Hand a massive head start. Here, after all, were thousands of groups, mobilised, with strong financial skills and ready to go. When all was said and done, Hand in Hand's business training reached 4,390 groups versus a target of 3,000. In other words, we'd managed to reach scale , quickly and efficiently.

Reaching so many Savings Groups virtually guaranteed we would exceed our jobs target, too. More interesting was the surge in hiring our members produced. Project members hired 30 percent more full-time workers and 55 percent more part-time workers than their Comparison Group counterparts.

Comparison Group members earned an average of US $28 per month, according to the review. Members who received our training, meanwhile, earned US $49 per month , a 75 percent boost. The difference was most starkly reflected in household assets.

Seventy-nine percent of our members reported investing in assets such as livestock and equipment at the end of the program. Only 49 percent of Comparison Group members said the same.

Hand in Hand entrepreneur Rwamagana said it best: "We have been given freedom of speech, space and more. We feel confident and know how to deal with issues," she told researchers.

The data bear her out. "The project has improved the financial inclusion of women," according to the report. "Women's small businesses are more profitable than men's, and an equal number of men and women now have access to credit."

Ten-and-a-half million. That's the number of Savings Group members worldwide. Together with CARE Rwanda, Hand in Hand has proven it's also the number of opportunities to create jobs, raise incomes and improve lives , cheaply and quickly.

Context is everything, of course, and Rwanda's growing economy no doubt played a role in the program's success. But at the very least the Savings Group-business training partnership model deserves trialling in another location. That's why, with our project in Rwanda behind us, Hand in Hand is seeking partners as we expand into Tanzania.

Let's Get to Work

Hand in Hand is hosting a seminar at the London School of Economics on 5 December to discuss the above findings and more. Speakers include CARE UK CEO Laurie Lee and experts in the field of job creation and financial inclusion.

Please click here for more information or to RSVP.

When he's not 9-to-5ing as Editor at Hand in Hand International, Nick works as a freelance journalist for publications including the Guardian, Time Out London and the Toronto Star. He is a Trustee at the Foundation for Democracy and Sustainable Development, and holds degrees in international relations (MA, Queen Mary, University of London) and journalism (BA, Ryerson University).