Understanding the Impact of Savings Groups 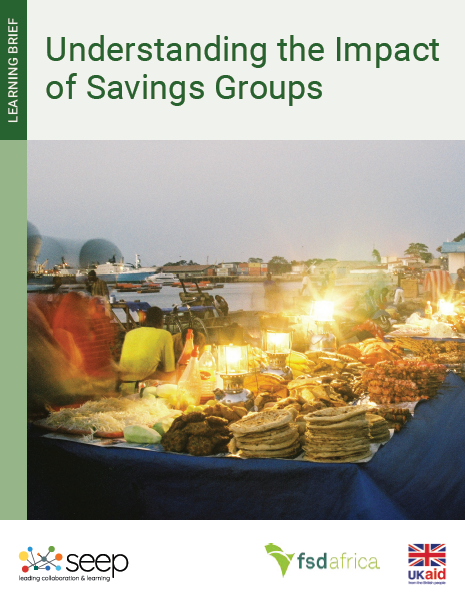 Over the past decade, funders, practitioners, and researchers have made significant investments to understand the impact of Savings Groups (SGs). In the mid-2000s, practitioners began documenting the impact of SGs, with findings from 15 studies summarized in Savings at the Frontier (Gash, 2013). And from 2008 to 2013, randomized control trials (RCTs) were completed across seven African countries, which were later synthesized in The Evidence-Based Story of Savings Groups: A Synthesis of Seven Randomized Control Trials (Gash & Odell, 2013). These early studies examined the member and household level impact of participation in an SG.

Since then, SG programming has evolved considerably. Savings Groups are increasingly promoted within multi-component projects, in combination with other interventions such as health services, agricultural training, advocacy campaigns, gender dialogues, and access to formal financial services. Innovations in program design have targeted vulnerable populations, particularly youth and orphans and vulnerable children (OVCs). In addition, the SG community has broadened significantly to include new Facilitating Agencies, donors, countries, target populations and contexts.

Along with an increasingly diverse body of programming, assessing the impact of SGs has also become more complex. Savings Groups are no longer examined in isolation as they once were. Researchers are tasked with understanding the impact of SGs within integrated programs, with various combinations of components, within diverse settings. With the proliferation of new programming and research, what do we now know about the impact of SGs?

This systematic review of the evidence addresses this question by examining how participation in SGs – within standalone and integrated programs – contributes to specific types of impacts for members and their households. It updates findings prior studies, and presents new lessons, particularly for health programming and for initiatives that target vulnerable populations. The paper catalogues 53 studies conducted between 2004 and 2017, each documenting primary research that includes measures of well-being. The paper describes and summarizes the evidence, identifies key gaps, and poses questions for future research. This learning brief constitutes a new stage in the ongoing conversation about SG impact.